No one is useless in this world who lightens the burdens of another.

I help a lot of people each day. That's not a brag - it feeds into the rest of this article. Just go with it. I help people mostly over discord and mostly regarding web development. I do it for a good portion of my day every day. I really enjoy it and may soon pursue a career in education. I feel that it also helps me learn by forcing me to research topics before presenting an answer. I'm not a good person for it and nobody owes me anything. I do it for selfish reasons.

With that said, I'm not the only person that answers questions online. There are... dare I say millions of others? There are a lot. People answer questions of any sort and I absolutely love it. I love the freedom of information and every step closer that we get to having a person with no formal schooling and an internet connection being just as educated as a college graduate, the happier I am.

When people answer questions however, the answer can usually fall into one of two categories: destructive or constructive.

Let's say a friend asks for critique on his new paper.

A piece of non-constructive criticism would be "this paper is bad". It serves to critique the recipient, but it does not help the recipient improve. It instead solely hurts the author's feelings, leaving their paper in the same state as before.

As a well-meaning person, you should strive to provide only constructive critique. This article isn't about criticism, though. I am simply drawing a parallel.

To properly illustrate what qualifies as a constructive answer, we must first discuss the obligations of a responder. It was discussed briefly in the opening paragraph of this article.

The Obligations of A Responder

What is a responder obligated to do? Certainly not to respond.

Think about it. What does a random person online specifically owe you, a complete stranger? Nothing. They owe you nothing and they are well within their means to act on that lack of obligement. How would they do that? By not responding. By simply reading your question and moving on.

If the responder then decides to become a responder (i.e. by responding), an obligation now befalls them. Namely, the obligation to act properly mannered and kind. This isn't any sort of moral obligation. Moral systems are objectively subjective. This is a colloquial obligation. It's something you take on by virtue of partaking in everyday discourse.

So what is a destructive response?

Like what was mentioned before, it is one that is overall unhelpful. Destructive responses can additionally be harmful.

Have you ever seen a question posed online and then an answer containing the acronym "lmgtfy"? It stands for Let Me Google That For You. It's a website which animates Google text box being filled in with a specific query and then redirects you to Google.

It's a snarky response where the responder is letting the questioner know that their question is something to be googled rather than asked on a public platform.

Lmgtfy is an example of a destructive response. It violates the obligation of a responder. Truly, no question is better answered with lmgtfy (unless someone has trouble remembering the name of that acronym) than with something else.

It is specifically destructive because it moves the question elsewhere, while still responding. If no response is given, someone else is free to respond. By responding, you are lessening the possibility of an actual response.

What may be confused with an lmgtfy is a link to a relevant article. A link to a specific article is usually much more helpful than just telling someone to Google for an answer. Google brings up many results. There's no easy way to know which sources to ignore. By providing an article, you're giving your stamp of approval.

It would still usually be preferable to explain it rather than link an article, but at times the article says it in a much better way than you know how.

I have seen this around a lot. There's a Twitter post about this which I absolutely love as well. 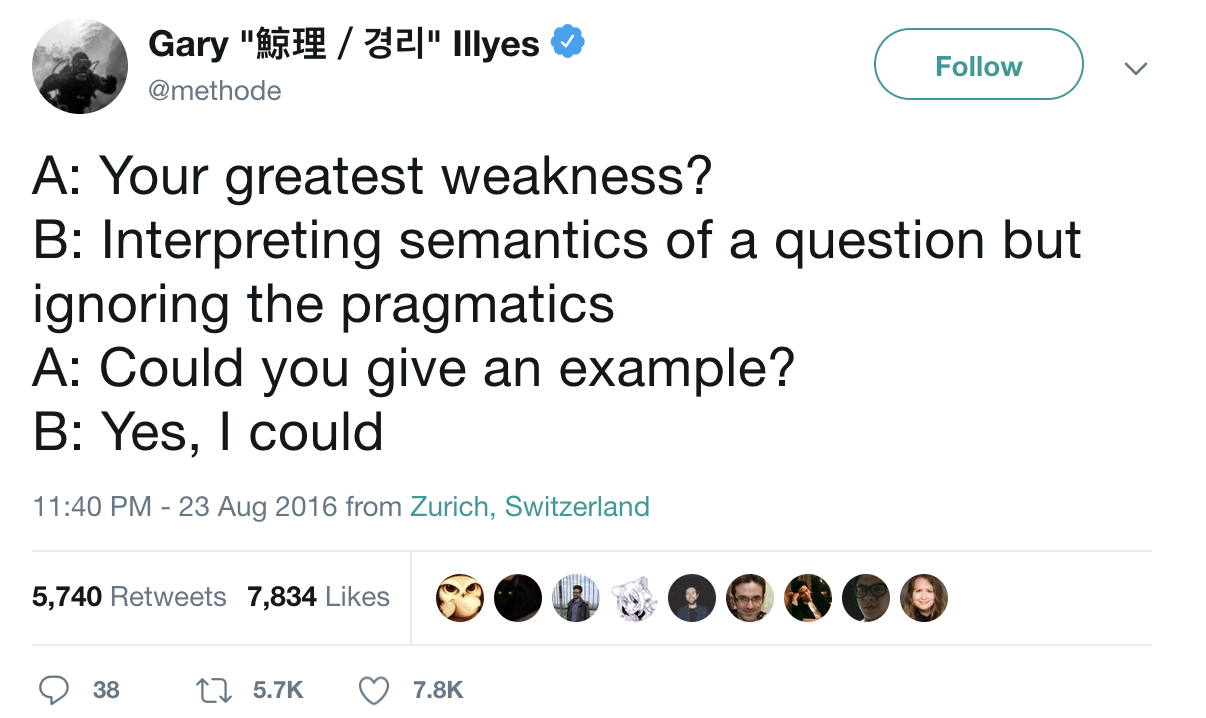 In everyday discourse, it's important to realize that people are asking more than their words strictly convey. I had a specific example brought up in a separate discussion on whether binary questions can get anything other than binary answers.

Say you're leaving the house with your significant other. You're asked if you remembered to lock the door. You respond that yes, you did remember, when in fact you never locked the door. After all, you did remember. You just never acted upon that information.

People usually feel more comfortable ignoring the pragmatics of a question when they're trying to lie. It's easier to tell the truth, so people take comfort in interpreting only the semantics of a question - playing dumb in a way.

Perhaps one didn't lock the door, but they did lay some furniture next to it, making the possibility of unauthorized entry just as likely as if they had locked it.

At that point, if you interpret "did you remember to lock the door" as "did you lock the door", you would say "no" and not provide any more information.

However, your SO in this conversation may have been asking that due to the fear of Intruders. In that sense, it would behoove you to provide more information. You did not lock it, but their fears should be put to rest due to some other reason.

Ignoring the pragmatics usually comes up when the person who asked a question is unaware of how deep the answer goes.

If someone asks "can x handle y", a constructive answer is not "it depends". You are ignoring the pragmatics. It should be "only in cases of z" with a possible follow up of more information.

This comes up a lot as well. I have seen people answer "who cares" in response to a question. You know who cares? The person asking the question.

Questioning the question is often also problematic if it doesn't relate to the answer. You can ask for a person's intentions in order to better answer a question, but if that's not the goal, stop it.

Question swerving is also an applicable term for cases where a persons question is answered with "just use [thing]". There is often a good reason why that person isn't using [thing]. It could very well be because they don't know about it, but often it's due to an underlying constraint that isn't immediately obvious.

Instead, one could phrase the answer in a question. Let's lay out the scenario to best illustrate this.

A: How would I go about accomplishing x inside x_technologies?

A: How would I go about accomplishing x inside x_technologies?

B: Is there any particular reason why you're not using y_technologies? It may fit your use case better.

And no, this is not just about phrasing your questions nicely, it's about the intent behind it. In the first scenario, you are allowing yourself to be unhelpful. You have taken the time out of your day to create a reply that was overall useless. You may not get a reply and a chance to redeem yourself.

A destructive response can also be explaining the answer in a manner that doesn't quite help the questioner due to its complexity. You can do this accidentally, not truly knowing the questioner's level of proficiency in the subject.

Depending on the subject and the learning paradigm one is trying to employ, this might not be destructive. The cases are too vast and contain too many parameters to be applied across the board. It is simply a topic to look out for when trying to be the most helpful you can be.